Christmas eve morning started in Gaungzhou around 6 am and finished in Los Angeles at 11am. The flight was a breeze. Japan Airlines is the best, they treated us like a kings. Even though we are just princes. :-)

If you haven't flown in a while they have this nifty camera on the nose of the plane so you can see what the pilots see. You can see the take off and in flight you can see the clouds and then the landing. I've always loved looking out the window of the plane, it gives me such a remarkable perspective. During the day you could look outside and see all the clouds and water below and then at night I could look at all the stars in the sky on my very own TV screen. I grabbed my book and I set my TV channel to the station that showed the view from the camera and left it on for the entire flight. As I looked at the screen, there was absolutely nothing but brilliant bright stars in the sky. A few clouds lit up by the planes head lights would give me an eerie sensation of just how fast we were flying. I sat back and read for many hours. Every once and a while I would look up at my screen and stare out into space. I'd keep my eye on a couple of really bright stars to see if we were changing directions and when the turbulence got bad, the stars gave me a point to place my focus.

We were about five hours from Los Angeles when I looked up at the screen. All you could see were stars in the blackness. Then, as if someone had drawn a line across the sky with a white magic marker, the horizon had been distinguished by the light of the sun. It was truly a magical site. It felt as if I were traveling in space. I lifted my shade to look out the window but it was still pitch dark nothing but stars. As the sun began, to rise the line began to get thicker, until it was a fuzzy blur on the surface of the earth. After about an hour the sun finally peeked over the edge of the horizon. It was the most beautiful sunrise I'd ever seen, the whole experience was mesmerizing. I put my book down and watched as the light filled every corner of the screen. It was Christmas eve morning again. This might of been one of those "you needed to be there moments"

I like flying for so many reasons but the main reason I like to fly is you have no where to go. You can just sit and be still, I love that. It's almost forced stillness. It reminds me of how we all go go go, gotta do this, gotta do that and never really just sit and be still. Sitting and being are for me the best gift you can give to yourself. The second reason I like to fly is the hours of undisturbed reading time. You can actually start and finish a book in one sitting. Okay too much kumbaya again.

Yes, we made it home. No delays, no bad weather and we are back in Los Angeles. Tina picked us up at the airport right where she had dropped us off over two and half months ago. She had Christmas music playing in the car and a long held hug waiting. It was the longest Christmas Eve day ever. We woke up in Gaungzhou at 6am Christmas eve and landed in Los Angeles at 11am and it was still Christmas Eve day. The last thing I remember before my head hit the pillow was the clock it said 11:50pm it was still Christmas eve....

It's Christmas eve and we are in Guangzhou, China. It's chilly and overcast. We checked into the Novotel at the airport last night and this morning we leave for Tokyo then to Los Angeles. Every Christmas song you could imagine has played in the lobby, bar, elevator and public bathroom. For a country that doesn't really celebrate Christmas they are doing a heck of a job.
Merry Christmas from China!!

We were packed and ready to go by 1:30, but we had to wait for the apartment owner to come in to town to get our deposit and finalized all the logistics of the apartment. We had planned on leaving for Guangzhou at 2 but didn't leave Zhuhai until 6. Her flight was delayed so we waited... and waited... until she finally arrived. When she arrived she wanted to take us for a meal to say good bye. So we went back to the Jack and Magic Pea, we had been there earlier in the day for lunch and had said good bye to the girls who gave us a ceramic mug and card with long held hug. It was a long sad farewell to a city I called home. I really enjoyed my time in this little city. It has so much to offer, from the weather to the location. The people where wonderful and the apartment first rate. We said good bye to everyone and then jumped in to a van for a two hour ride to Guangzhou.

Dean spoke chinese the ENTIRE time in the van. The driver, who sat patiently since 2pm for us in Zhuhai, talked right along with him until we arrived in Guangzhou. She was telling us about her Taiwanese boyfriend, cars and of course China. I sat in the back trying to recognize words and phrases that I had learned in school. Somehow I was able to follow along but at times just drifted off thinking about all the friends and fun we had had in Zhuhai. I didn't think I was attached but I could feel a little pull of sadness as we left. Everybody was feeling it, even Li the driver who had taken us back and forth to the gym was having a difficult time with our departure. He couldn't figure out if we were going for good or if he needed to be prepared for a call from us for a ride back home. He was always available when we needed him, to be picked up and brought back to our pad.

It had turned cold in Zhuhai today, the wind picked up and it felt a little bit like winter. It set the tone for the rest of the trip north.

Just a few days before Christmas... 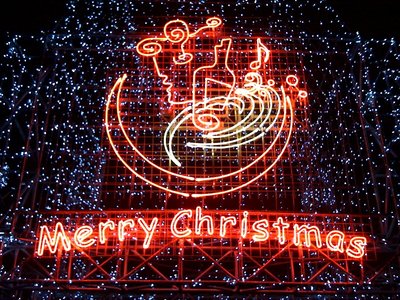 Last few days before we leave Zhuhai. We had lunch again at the Shanghai Restaurant. 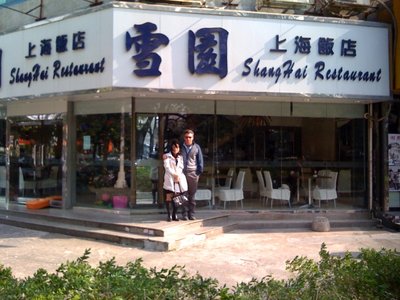 If you are in Zhuhai it's a must place to eat. This is a picture of our one of our recent lunch dates. Dean continues to help EVERYONE speak english. This little one didn't know what to expect sitting at our table. Dean spoke chinese and english with her until finally she just smiled and started to eat. Such a sweet girl. 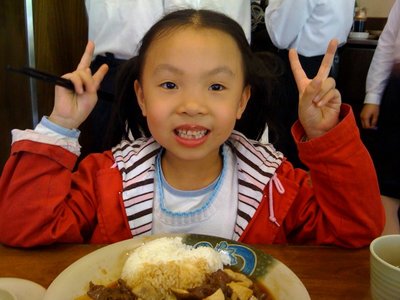 We went by the school to say good bye and use the facilities. 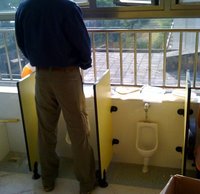 Then back to the apartment and our last sunset. 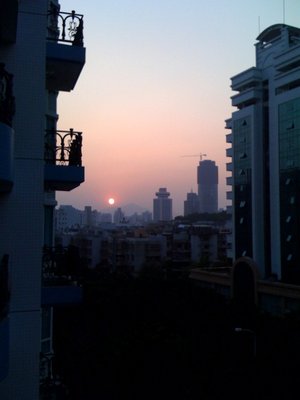 A day in Zhuhai

It was a bumpy morning, we both are feeling a little beat up. Not sure what to do today. Our free day to do anything we want. No classes no commitments and no clue. We head to the gym and then to lunch. Went to Shanghai restaurant and decide to sit downstairs. Downstairs is very cozy and you often share a table with others. It's packed today and we both are starving. We all know what that means, right? There are no pictures on the menu so Dean wings it. After he orders, the waitress is asking for something but Dean isn't sure what exactly. A young couple walking by tells us "the waitress wants you to pay now, before you get your food, that's the way they do it here". They sit down at our table and the four of us have lunch together. They were so nice. Giving us a sample of their food and telling us all the places they had visited in the states, what they do, asking what we do. It was such a enjoyable time. She complimented Dean on his Chinese and off we went.

We walked to the park. It was your usual Saturday in the park with the kids playing. 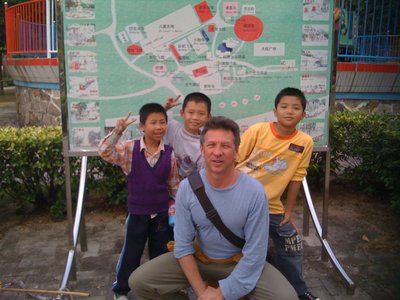 Dean made some new friends.

Did I mention the sign to the amusement park was a bit odd. 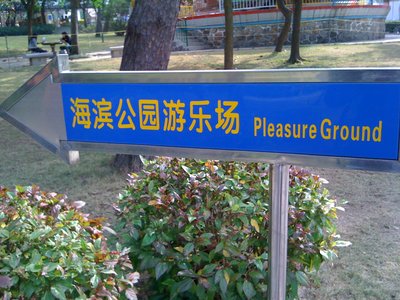 Of course we followed the sign and found our Zhuhai wedding picture. 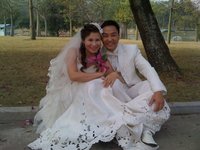 We walked to the famous symbol of Zhuhai, The Pearl Lady. Zhuhai literally means Pearl sea.
Here are two pearls for you. 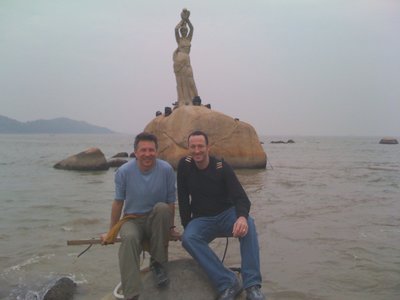 The view from the mountain top was a bit overcast, but at least you get to see some of the city. 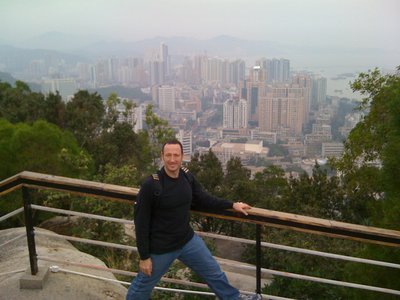 Dean and I were looking at the view when a group of girls offered us something to eat. They were all standing around looking at the view too. Dean asked if they knew where this special grocery store was and the next thing you know they started to surround him, as if he were the leader, asking him if he would be their english teacher and that they didn't expect chinese to come out of his mouth. Dean turned to me and in very subtle way said "let's get out of here before it's too late". They did look a bit hungry. :-) 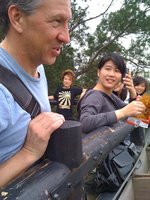 We never found grocery store but we did eat delicious street food all the way home
As we waited for the cab we took this shot. Haircuts in the street. I felt bad for the little boy in the picture. They started to shave his head but after a little commotion with the mother the guy cutting his hair walked away. 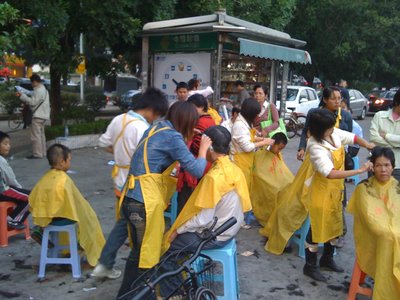